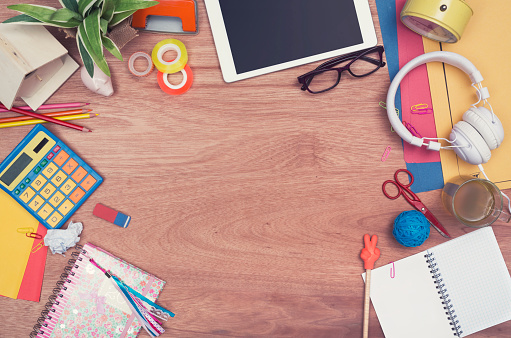 Grab your “sticks”, your project, and head to the Elgin Community Hall to share your enthusiasm for hand work & reading. All ages, abilities, and types of needle craft projects are welcome. Space limited to 15 people, please wear a mask and physical distance. 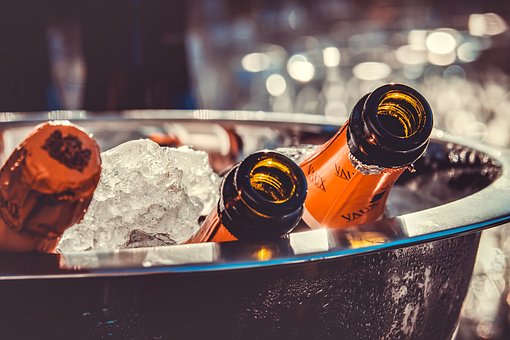 Ring in 2021 with all of us at The Cove! Let’s put 2020 behind us and have a safe and happy NYE party! We’re having Chinese Food!
Back by popular demand, TURPIN’S TRAIL (Kingston/Perth Road Village, East Coast/Folk/Celtic) will perform for New Year’s Eve! Turpin’s Trail is the Kingston-based quintet of Chris Murphy, Jon McLurg, Brian Flynn and Noal St.Amand. Having played concerts and festivals across Ontario, Turpin’s Trail has shared the stage with artists such as Murray McLauchlan, J.P. Cormier, and Leahy. Tight harmonies and acoustic instrumental accompaniment (guitar, mandolin, banjo, Irish Bouzouki, ukulele, Bodhran) bring out the beauty and energy in their original songs and their creative interpretations of songs drawn from Celtic, folk, bluegrass, and popular music genres. Amalgamating gorgeous folklore and traditional celtic with east coast song, naturally, they are HUGE fan favourites in the Westport area and a great celebration band for New Year’s Eve!

STEVE MARRINER
Working with Jimmy Bowskill in all forms of management and bookings. TV and radio interviews/appearances. Session work, soundtracks and sideman work. Jimmy is quite possibly the most talented and diversified players on the Roots and Blues scene, mastering a number of instruments from electric to acoustic guitars, mandolin, fiddle, pedal steel and stand up bass and he has perfect pitch powerful vocals.

“I played with him at this big festival in Canada called ‘Nakusp.’ He’s got a great feel. He reminds me of Paul Kossoff [Free], who we sadly lost all those years ago. He’s almost the spitting image of him which is incredible.”…Paul Rodgers, leader of Free, Bad Company, singer for Queen and The Paul Rodgers Band

“Great Guitar playing with a lot of feeling and expression in all styles from ZZ Top inspired Blues/ Rock to Peter Green, his country “finger pickin” or Power Rock.”…Guitar Magazine

The potential for big success is existing and Blues/Rock is in need for flesh blood”…Slam Magazine, Germany

“Bowskill has developed into one of this country’s most versatile roots and blues musicians. Not only is he a gifted guitar player, but he is equally as comfortable on the mandolin and fiddle (as well as other instruments, I don’t let him near the piano!). Did I mention he sings like a bird as well? What a talent!”…Lance Anderson, Juno Award Winning producer, keyboardist and associate of Oscar Peterson.

“I’ve known Jimmy since he appeared busking out front of Healey’s and Jeff invited him in to play with us. He was 11 years old and already sounding great I’ve had the pleasure of his friendship and playing on the same stage many times. Over the years it’s been great watching him grow up and see his musical abilities expand over time. Great guy and musician. I look forward to sharing the guitar spotlight with him again in the future.”…Pat Rush, Electric Guitar and Slide Guitarist with Johnny Winter

STEVE MARRINER
Steve Marriner is a dynamic and powerful performer. His incorporation of various styles of blues, roots and soul come together to form an original sound that is both deep and genuine.
Steve has toured internationally and performed at prestigious festivals, concert halls and music clubs throughout Canada, The US, Europe and Australia. While he currently dedicates most of his time to fronting the acclaimed roots sensation “MonkeyJunk”, Steve can often be found performing intimate solo shows and joining other artists as a dynamic sideman.
During breaks between tours, Steve has developed a sterling reputation as a studio musician and producer. He has an extensive discogrpahy and has recorded with the likes of Kim Wilson (The Fabulous Thunderbirds), Harry Manx, Richard Bell (The Band, Joplin), Gordie Johnson (Big Sugar, Grady), Paul DesLauriers, Steve Dawson and David Gogo. Not yet thirty years old, he has already produced ten full length studio albums. The man doesn’t stop.
Originally renown for his prowess on the harmonica, Steve has become a multi-instrumental force in recent years adding bass, guitar, drums, and keys into the mix. He’s won multiple Maple Blues Awards for Harmonica Player and Male Vocalist of The Year. As well as a 2012 Juno Award for Blues Album of The Year with MonkeyJunk.

Dave Balfour is a real and vivacious musical personality! He reels you in! He has been the MC of Stewart Park Festival in Perth for 18 years and hosted the Wednesday night jam at O’Reillys in Perth for over 10 years, bringing in a mix of young and old local talent each week. Each week Dave and guests would play a for a few hours of acoustic magic and mayhem with weekly new material keeping musicians on their toes. This larger than life man, with a sweet soft voice will have you tapping and humming along to your favorite tunes from the likes of Dave Matthews Band, Little Feat, U2 and The Beatles. He has played with Dog Day Afternoon (with Jamie), Guthrie House, Bald Like Dad and more.

Jamie Campbell has quite a prolific past in the music business as well. He is a member of Fireweed with Gary William Rasberry & Rob Unger. Voiceplay, guitarwork and a mutual love of all things acoustic fire the songs that we write and perform. Fireweed’s reputation for heartfelt, intimate live shows is wide-spread and well-known. They’ve performed at Blues Skies Music Festival, Summerfolk, Stewart Park Music Festival, the Ottawa Folk Festival, Mariposa, Hillside Music Festival, Skeleton Park Music Festival and the Amherst Island Folk Festival. He was also a member of acclaimed Quebecois performer Roch Voisine’s touring band! A high accomplishment for sure. Most recently, he has been playing the co-lead with Miss Emily Fennell and Doug Reansbury is a sensational tribute to the music of Carole King and James Taylor called You’ve Got a Friend featuring the best in Kingston’s musical veterans in Zak Colbert on bass, Ken Hall on keyboards, Duncan Holt on drums and James Wannamaker on sax. Always a packed house, this band will play The Cove again on Fri.Sept.7.2018! 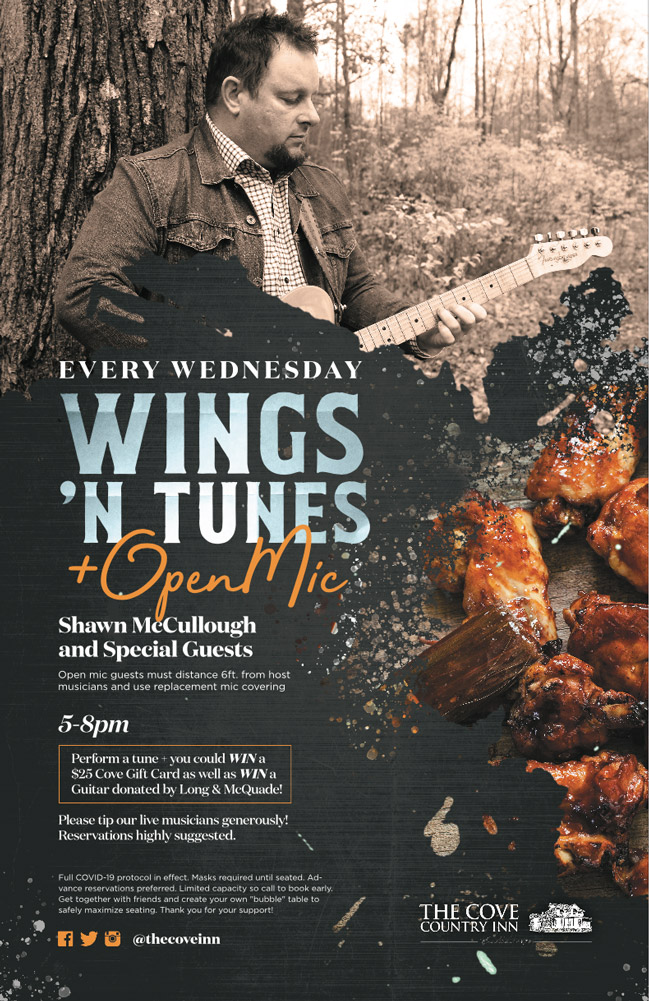 “Wings ‘n Tunes + Open Mic” hosted by Shawn McCullough is back every Wednesday from 5-8pm at the Cove.

Master guitar player/singer/alternative lyricist/showman/songwriter Shawn McCullough helps you break up your work week and give you a little social fix. Shawn has played and toured with Canadian Country star Jason McCoy (The Roadhammers) and has been a part of Telecaster supergroup The Telebastards featuring Steve Piticco, as well as a member of DoubleBack with Wade Foster and John Wilberforce. He is highly in demand as a session musician and sideman for his incredible skill, wit and stage presence. He has a solo record to his name “This is Me” and has performed recently with rising CMAO and CCMA nominated Country star Brea Lawrenson!

Hear the next best thing in the local music scene at the Open Mic! You can win a Gift Certificate to The Cove nightly with crowd response AND/OR get your name in the draw for a guitar at the end of each season of Wings ‘n Tunes and Rack ‘n Tunes.

Have a NIGHT out on the town with MUSIC and a pound of The Cove’s classic breaded WINGS with Fries or your choice of side for $17 + HST.

Thanks to Nate and everyone at Long and McQuade Music in Kingston, you can win an acoustic electric guitar if you get up and perform a song! Sign a ballot and you are good to go!

“Full COVID-19 protocol in effect. Masks required until seated. Advance reservations preferred. Limited capacity so call to book early. Get together with friends and create your own “bubble” table to safely maximize seating. Thank you for your support!” 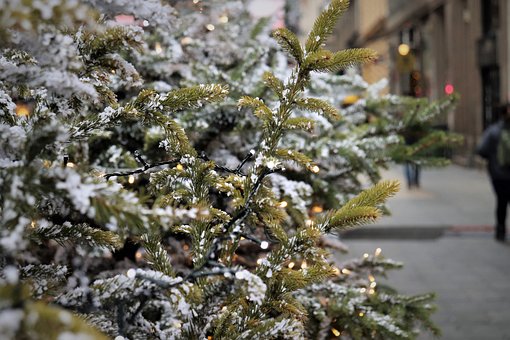 Each Christmas season the Delta Mill Society installs large lighted candles and wreaths in the Old Stone Mill windows and people come from many miles around to see this beautiful seasonal display.

The Old Town Hall will be open from 5 pm to 8:30 pm featuring our Christmas Gift Table with all sorts of interesting items.
Hot Dogs & Refreshments will be available for sale in the hall.

Lower Beverley Lake Park will be lit with over 100,000 lights. You can take a ride on the Wagon from the Delta Fair Grounds that will take you to the park and back.

You can upload the following documents 1 & 2 for more information about the event.

The Rideau Lakes Public Library Board meets monthly, currently through video conferencing, and is open to the public. Please contact  Vicki Stevenson, CEO, for more information at vicki@rlpl.ca  and for a link to be able to join the video conference meeting via Zoom.

Board agendas are posted on the website ahead of the meeting and minutes are published after they have been approved at the following board meeting. To access the agenda and archived minutes visit: https://rideaulakeslibrary.ca/your-library/board/

Shaun and Wayne recently returned from Memphis Tennessee where they performed 3 shows on Beale Street at King’s Palace and The Kooky Canucks.

RILEY & RILEY have developed their own unique, emotionally explosive, sound experience. There is a grittiness to their blues that is refreshing. It is raw and different.

CLOGGING – at the Newboro Community Hall every Wednesday evening at 7pm and at the South Elmsley Municipal Complex (OPP Offices on Hwy 15) Thursday afternoons from 2-4pm. This is a fun way to exercise and expand your dance talents! Classes are $2 a class. Sponsored by the Newboro Recreation Committee. Cal Dorothy for details 613-272-8053.

COMMUNITY SHOPPING BUS sponsored through the Portland Seniors Club leaves for the local shopping mall in Kingston every 2nd Tuesday of the month.  Call Vicki at 613-272-2676 to reserve your seat.  Cost $15.00 return trip.  Not just for seniors!  All ages welcome.

COFFEE DROP-IN: Throughout the Township come and enjoy a bit of social fun! Bring your latest craft project, a deck of cards or just yourself.  Children are welcome.  Donations appreciated.

COMMUNITY FARMERS BREAKFAST every 4th Tuesday at the Harmony Lodge in Philipsville starting at 8:00am. Sponsored by the Philipsville Masons, everyone is welcome. Contact Ross Hawkins for information 613-359-5833.

DELTA McMUFFIN LIGHT BREAKFAST every Saturday morning from 7:30am to 10am at Delta United Church. $5 will get you coffee with an egg & English muffin and a chance to meet your neighbours. Everyone is welcome. Call Arvin Riskie for info 613-928-2091.

Hamburger Fridays at the Legion

Hamburger Fridays are back starting July 3rd from 12-2pm. The Upper Rideau Branch 542 returns with their popular weekly event serving hamburgers, hotdogs, sausages, and fries. You can enjoy your food on their patio or take it away. Their event will run every Friday until the last in September.

Make sure to visit them on Friday to support this great staple of our community.